Message from James Brett – The Museum of Everything

I have personally taken a look at this work and I think it is terrific. These images seem to be filled with unusual and individual figurative perceptions. I really like the series. We would certainly be interested in presenting your daughter’s work in one of our exhibitions if we were able to have enough examples of strongest material.

Here are some of the works which particularly struck me:

James Brett
The Museum of Everything 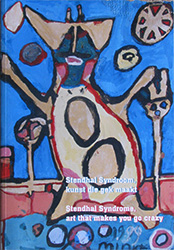 For more than four years Marjori has been working in the studio developing her own style by experimenting with different materials on different surfaces. The way of supporting and dealing with her somewhat problematic behaviour has worked in a positive way on her expressive development. It is not her behaviour that is emphasized, but who she is and what she does.

You can usually find female figures in her work, sometimes portraits but quite often entire female figures. She finds her inspiration in glamour and fashion magazines, advertisement leaflets or simply something she sees on the street.

She transforms these impressions, thereby creating isolated fantastic figures with a strange and mysterious radiation.

In the LAK theater in Leiden is an exposition consisting of 58 linen canvases measuring 120 x 50 cm depicting the Battle of Hastings (1066) in cartoon form.

Put together, the canvases stretch 70 meters. The work is inspired by the embroidered tapestry of Bayeux.

The majority of the work was created or finished by Marjori Lutter.

The Bayeux Tapestry is set to be displayed in the UK after France agreed it could leave its shores for the first time in 950 years – BBC News 17 January, 2018

In 2006, Marjori Lutter shared her studio with a fellow artist in Frankfurt. Together they shared a common artistic vision whereby each inspired the other. The work that followed out of this meeting was exhibited in the Romerhallen along with her glasswork created in Iceland. The work itself demonstrated power and craft.

Marjori’s work was given pride of place during the exhibition. 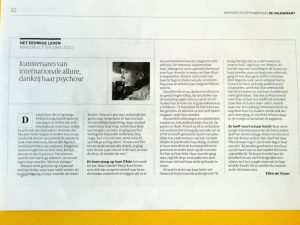